Alert: You are not allowed to copy content or view source
Buy Practice Papers 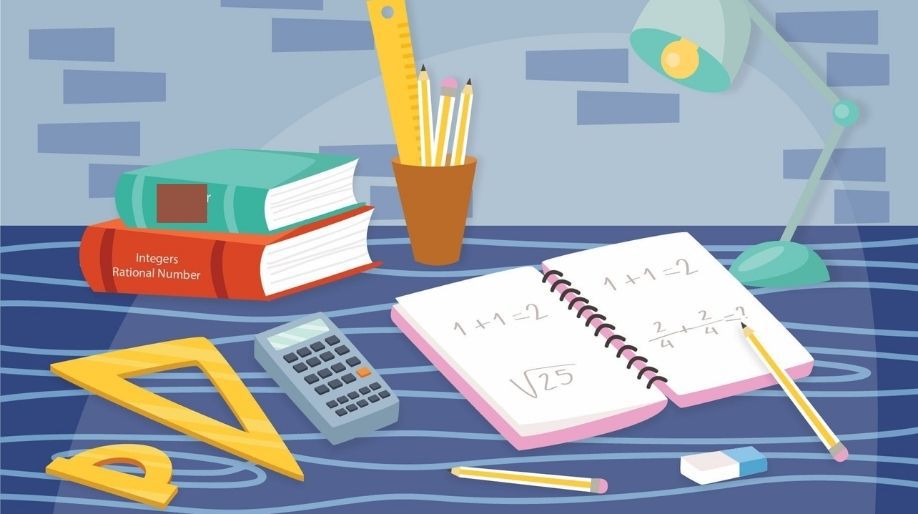 Solving equations having variables having the variable on both sides

To eliminate the denominator terms, multiply both sides of the equation by the LCM of 6 and 8. 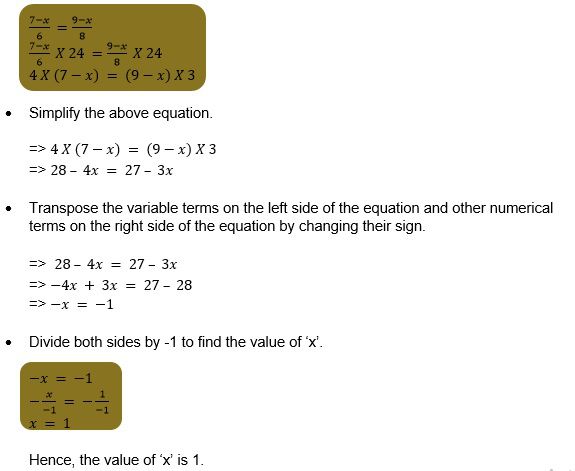 Linear equations are used to find the value of an unknown quantity. Have a look at the following examples:

EXAMPLE 1: The sum of the digits of a 2 digit number 13. The numbers obtained by interchanging the digits is 14 more than the given number. Find the number.

SOLUTION: Let the digit at units place be x and the number at tens place be y.

Thus, the formed number is= [Since x is at ones place and y=13-x is
at tens place]

After interchanging the digits, the number is= [Now x is at tens place &
y=13-x is at one's place]
The interchanged number is greater than the original number by 14. [Given]

EXAMPLE 2: The distance between town A and town B is 123 km. Two buses begin their journey from these towns and move directly toward each other. From town A, the bus is moving at a speed of 45 km per hour and from town B, the bus is moving at 67 km per hour.
Assuming the buses start at the same time, find how far is their meeting point from town A. 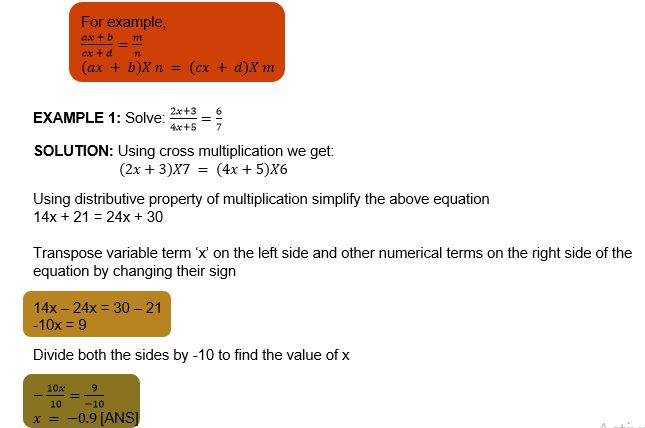 Consider the following examples to see how we can reduce equations involving ratios into linear form.

Divide both sides by 4 to find the value of x.

Q3) Three numbers are in the ratio 1:2:3. If the sum of the largest and the smallest equals the second and 45. Find the numbers.

Q5) The difference between two numbers is 23. And the quotient obtained by dividing the larger number by the smaller one is 4. Find the numbers.

Q6) A man cycles to the office from his house at a speed of 5km per hour and reaches 6 minutes late. If he cycles at a speed of 7km/hr, he reaches 8 minutes early. What is the distance between the office and his house?

Q7) Suraj is now half as old as his father. 20 years ago, Suraj’s father was six times Suraj’s age. What are their ages now?

Q8) The perimeter of an isosceles triangle is 91cm. If the length of each equal side is 2cm more than the length of its base. Find the lengths of the sides of the triangle.

Q9) The age of a boy in months is equal to the age of his grandfather in years. If the difference between their ages is 66 years, find their ages.

Other Chapters of Class 8 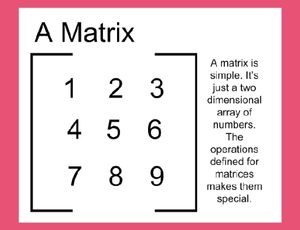